Commercial trucks are large, slow, and difficult to maneuver or bring to an abrupt stop. Also, truck drivers have been known to circumvent or outright ignore certain restrictions and regulations (sometimes at the directive of their employers) and operate trucks that have been poorly maintained or manufactured. These factors and others often lead to serious accidents that can result in catastrophic injuries or even death.

In most instances of a trucking accident involving one or several motorists, the occupants of the smaller passenger vehicles are the ones who are seriously injured or killed. Most commercial trucks usually weigh at least 20 times more than smaller cars, trucks, and vans, making other drivers and passengers far more vulnerable due to the sheer size differentiation. Their massive size also causes difficulties braking, as loaded tractor-trailers take usually take around 30% longer to stop than smaller vehicles. For this reason, it is imperative that all motorists use their turn signals consistently and avoid braking sharply unless necessary.

In 2014, 3,660 motorists were killed in accidents involving large commercial trucks according to the Insurance Institute for Highway Safety. The truck drivers and their occupants accounted for only 16% of these fatalities, while 68% were drivers and occupants of smaller vehicles, and the remaining 15% were pedestrians, bicyclists, or motorcyclists. And in two-car accidents involving commercial trucks, 97% of fatalities occurred among drivers or passengers in the smaller vehicles. Unfortunately, this trend appears to be on the rise, as the number of commercial truck-related fatalities increased 16% between 2009 and 2014. If you or someone you know has been injured in a truck accident, contact us for a free consultation. 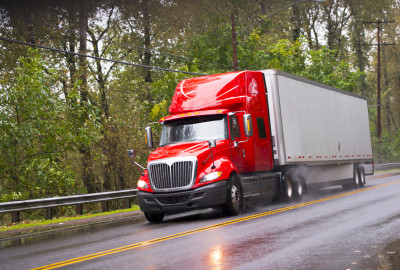 Thankfully, there are practical measures that truck drivers and motorists alike can take to avoid accidents and decrease catastrophic injuries and death.

These are some great tips to keep everyone safe regardless of your vehicle, but it mostly just comes down to common sense. Maintain plenty of space between vehicles, allow time for braking, and don’t cut off fellow motorists, especially large commercial trucks. And remember, we’re all just trying to get where we want to go, so be courteous and don’t allow yourself to get frustrated by your fellow motorists ― a tantrum isn’t worth the tragedy.

Do You Need Help After a Truck Accident? Contact Perry Charnoff, PLLC.

If you or someone you love has been seriously injured or lost a loved one in an accident involving a commercial truck, please contact Perry Charnoff, PLLC so that we can learn more about the particulars of your potential claim. We offer free consultations and our contingent fee policy guarantees that you will not pay any attorney fees unless we achieve a recovery in your case. Please call us today at (703) 291-6650 or complete the form on this page to learn more.